Our coffee pot always has a cup or two left in it.  Not sure why we brew more than we need...guess we are waiting for that day when we don't have time to wait for another cup to brew, water to boil for the french press or to insert the plastic K cup and push on.

This week we officially joined the grass fed meat society.  The meat smelled better raw, the flavor was intense and even the left over fat looked healthier.

During the rush to make our meat purchases Monday, the three year old was on the verge of a melt down,  I asked the butcher for a london broil while I was looking at the short rib.  London Broils have their place in my kitchen, usually after a long time marinating and cooked over hot coals.  So when I realized my mistake this afternoon while digging through my almost empty fridge looking for the short rib I had no choice but to cook up the london broil.

This is not a quick meal.  Plan at least three hours.  Maybe save it for a rainy, wet, cool day when you need the stove to put off some heat and a food cooking smell good odor.  Tip of the day - wear an apron if you do not want to ruin your clothes. 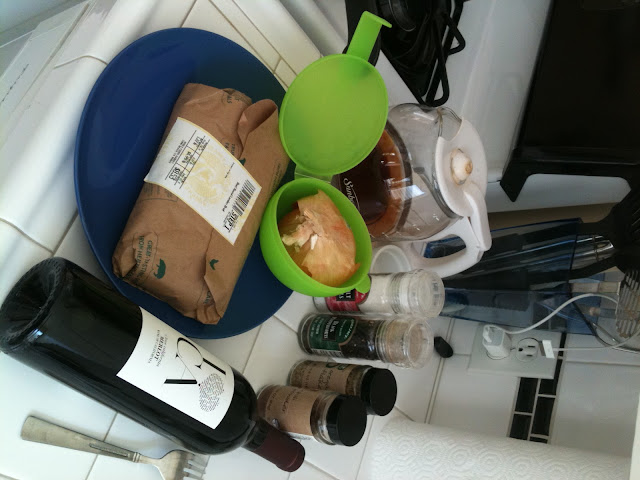 1. Arrange all your ingredients.  To avoid touching the salt and pepper grinders after touching the meat I grind enough salt/pepper into a small bowl and then season from this bowl.  Its easier to wash a bowl than the grinders. 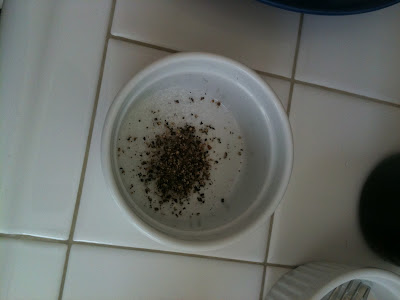 2. Season the meat with sea salt and pepper.  Don't just drop/grind it on.  Massage it into the meat. 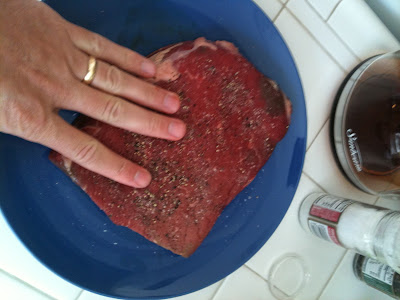 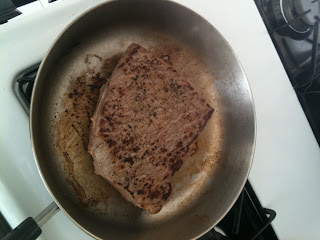 4. Remove steak from pan and gently poor in the wine and coffee along with the chili powder and oregano.  While still maintaining a high heat scrape the brown flavors off the bottom of the pan.  If you are using a non stick do not use a pair of tongs to scrape...I'm using 50+ year old Revere ware my grand mother gave me for college. 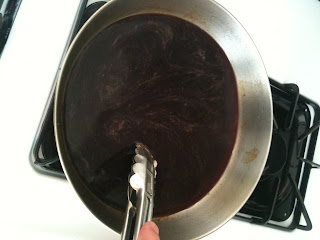 5.  Once the liquid heats up and the bottom of the pan feels smooth, add the steak back into the pan along with the onions.  There should be enough liquid to cover, or almost cover, the meat.  Don't have your three year old add the onions first cause the steak will sit too high (like this picture). 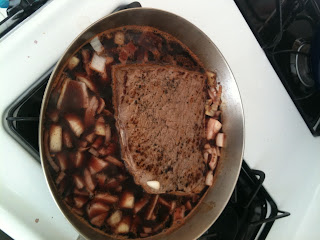 6.  Cover the pan (forgot to get a picture) and turn the heat down low.  You want the liquid to slowly simmer.  Set the timer for 3 hours.  Check back to make sure the liquid hasn't boiled off. 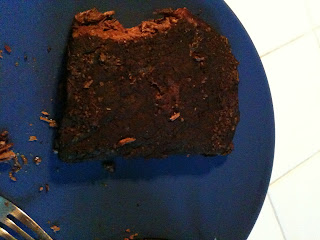 7.  Around hour three check the meat's tenderness.  In our case we started eating it before I could photograph.  Check out the color difference from start to finish. 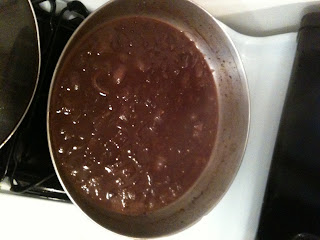 8. The pan juices will make a great gravy if you eat flour.  Since we are gluten free I cranked up the heat and reduced the remaining volume in half.  I should have tried to make gravy with almond flour. 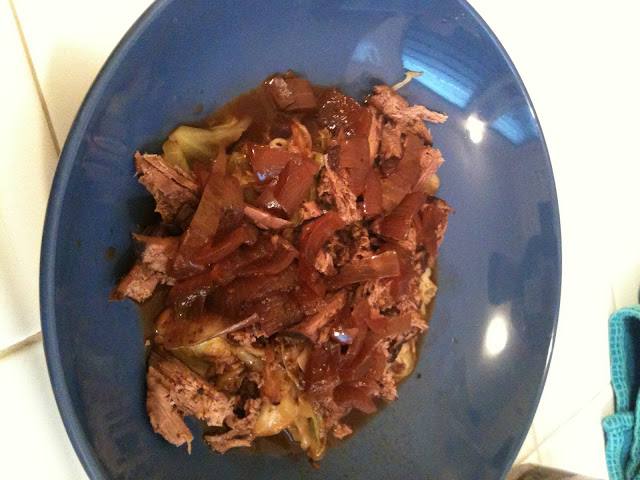 9.  I shredded the meat over sauteed cabbage and drizzled in the pan's gravy.